After working around with many interesting fragmentation part in Cisco IOS, i assumed to have a lab on the Multilink PPP scenario where your Edge router have multiple connection to the ISP Edge router and you would like to Fragment the Data, first let’s look what the fragmentation is and how it works:

LFI is a QoS tool that address bandwidth constraints to some degree, which directly lower delay by defeating a side effect of a small transmit clock speed, namely Serialization Delay ( already discussed in previous post ).

When a router starts to send a frame out of an interface, it sends the complete frame, if a small, delay-sensitive frame needs to exit an interface, and the router has just begun to send a large frame, the small frame must wait until the whole large frame has been sent before the router will send the small, delay-sensitive frame.

LFI tools attack the serialization delay problem by ensuring that large packets do not delay smaller packets, it accomplishes this by dividing larger packets (fragmentation) and interleaving later arriving smaller packets in between the fragments from the larger packet, typically VoIP Packets.

If you have point-to-point link, and need to perform LFI, you must migrate from your current layer 2 protocol to MLP, to use MLP LFI. Multi Link enable you to have multiple parallel point-to-point links between a pair of devices, such as a router. The main motivation of MLP was to allow dial applications to continue adding additional switched WAN connections between the endpoints when more bandwidth was needed.

In the above scenario, R1 will fragment the data received from Site-A toward R2 ( Site-B ), Router 1 and Router 2 are connected via Serial Interfaces and we will bundle both serials into a single multilink.

Configuration on R2 is nothing then only a interface ip addresses and routing protocol let’s assume RIP in our case: 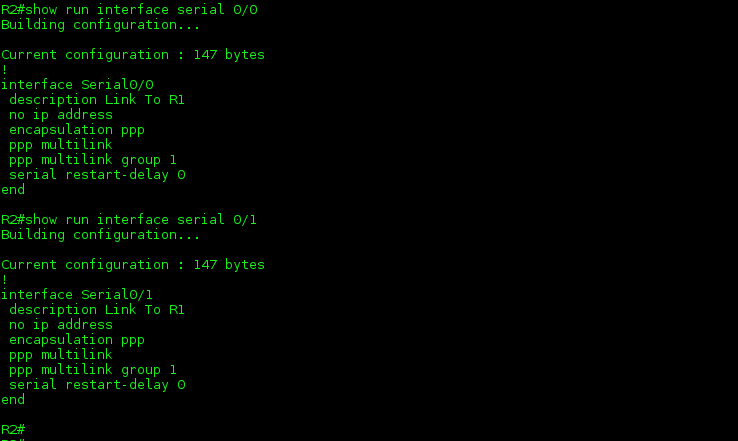 Above configuration in R2 is very straight forward, you see that the links are configured for multilink Bundle and also the multilink configuration, now let’s start the fragmentation and interleaving under the both routers in 5 steps: 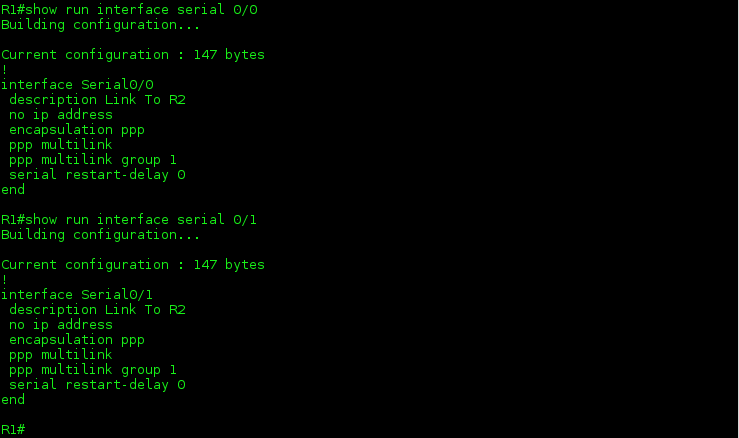 The following command next shows the addition of the ppp multilink fragment-delay 10 command. Interestingly, this command does not enable fragmentation, but rather defines the maximum fragment size. Because the bandwidth was already set to 128, IOS calculates the fragment size as bandwidth * max-delay (in seconds), or 128,000 * .01, which results in a 1280 bit (160 byte)fragment size.

So far, the configuration asked for fragmentation, but not for interleaving. Without interleaving, the unfragmented packets still must wait on all the fragments of larger packets to be serialized. In the context of QoS, it seems rather silly not to automatically interleave the shorter, unfragmented frames. Remember, however, that MLP fragments frames to load balance across multiple links without running into the problems relating to out-of-order packets. Adding fragmentation for 10ms fragments, the same command has to be entered into R2:

To gain the QoS advantage of reducing serialization delay by interleaving packets, the ppp multilink interleave command is added to the configuration next. The show interfaces command that follows lists a line that now shows a counter for interleaved packets, with the counter indeed showing that some packets have been interleaved. Now the example has added all the requirements for MLP LFI, and all seems well — but it is not! The voice quality is still barely tolerable, with long delay and many breaks in the speech.

The voice quality still suffers because of the queuing tool, WFQ. Notice that the next command in the example, show queue multilink 1, lists a voice flow with some statistics highlighted for the voice flow. The command lists drops for the highlighted voice flow, which is making a large impact of voice quality. Although the voice packets that get serviced do get interleaved, causing the interleave counter in the show interfaces command to increment, the quality still suffers because of the queuing delay and drops.

This step is adding the interleaving feature on the both Routers ( router 1 and router 2 ), the command is:

The best ways to prevent the drops is to enable Low Latency Queuing (LLQ) for the voice traffic. In this case, the configuration shows an older Queuing tool, IP RTP priority, which is enabled with the ip rtp priority 65 command. (However, LLQ is still recommended today for voice traffic.) After adding
the ip rtp priority command, the show interfaces command still shows interleaves, which is good, but the show queue command does not show any drops for the voice flow. In fact, the voice-call quality improved significantly.

This step is adding the RTP Priority Queuing Configuration, the same has been configured under R2:

You can add the above command under the R1 and R2 interface multilink, and you can verify the same with the below command:

The final step is the verification on R1 and R2 that both has been configured for LFI on the MLP, however Cisco IOS software enables to use a couple of styles of configuration to configure MLS, this example/lab above shows the use of Virtual interface called a Multilink Interface.