You might saw some examples or Labs on this scenario where the ISP Provider Routers don’t support IPv6 infrastructure, or let’s say they are willing to enable IPv6 on their Core Routers, as this might not be an easy task due to lots of overload on the Provider Routers, or it has been scheduled for migration in a specific time, and to resolve this let’s see how tunnel works over IPv4 Enabled cloud, let’s assume following scenario:

In the above scenario, ISP is running IPv4 and providing internet or intranet service to the Customer-A, and the PE ( Provider Edge ) routers are configured to provide default IPv6 addresses to the two Edge Customer-A routers, Below are the IP Block used in this lab ( Both IPv4 and IPv6 ):

The above IP addresses structure is quick simple as we will see them all in the configuration section of each router, let’s start from Router 1 which is Customer-A: 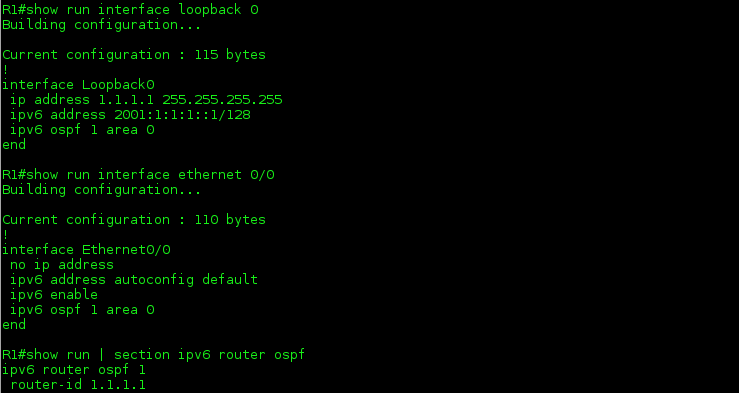 Router 1 Interface Ethernet 0/0 which is connected to ISP PE Router ( R2 in this case ) and configured with the Default IPv6 address syntax, which means that it will take it’s IPv6 address from the PE router, in this case there is no much configuration needed in the Customer side routers, so only IPv6 routing process has to be started and adding the default command it will take it’s IP address from it’s next hop interface ( next-hop interface has to be configured with IPv6 ). 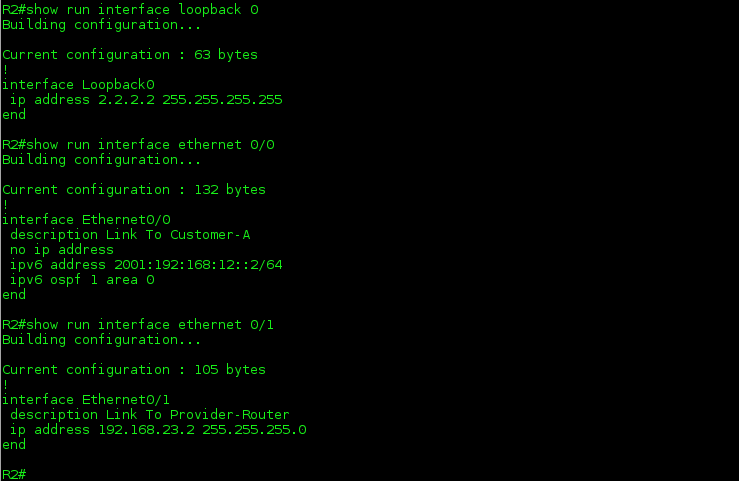 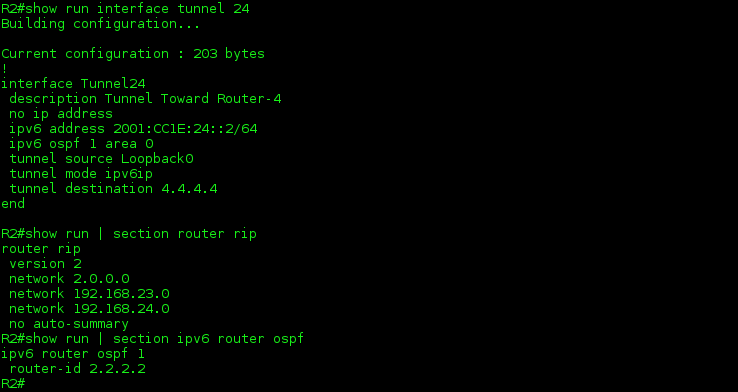 Above you can see the ISP Provider Edge Router which is R2 in this case, has been configured with very straight forward configuration, we configured it’s interfaces and then enable RIP on the ISP Domain ( However you can enable any routing protocol which ease for you ), a tunnel interface has been configured toward Router-4’s loopback interface, and the Tunnel Mode is set to the IPv6IP which means that encapsulate These IPv6 Packets coming to the interface into IPv4 and Pass it toward Router-4, we have also enable IPv6 OSPFv3 process in between the Tunnels and the Links toward the Customer-A. 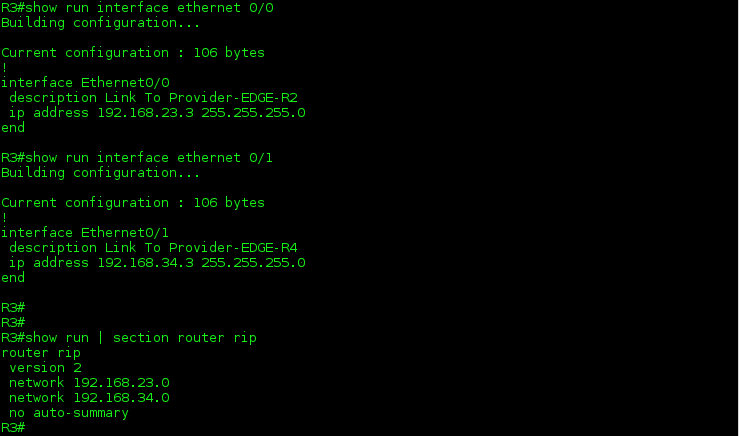 Above Router-3 Configuration is very straight forward and in this case it doesn’t need to do anything with our Tunnel Configuration or Encapsulation Process, technically it is not aware of the Packets traversing between these two routers. 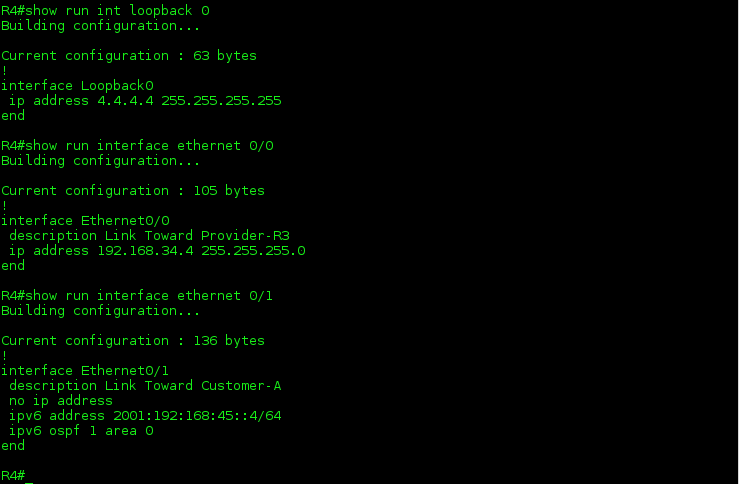 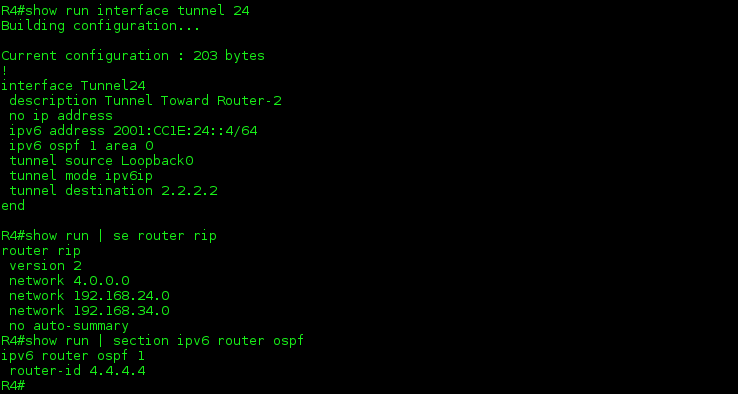 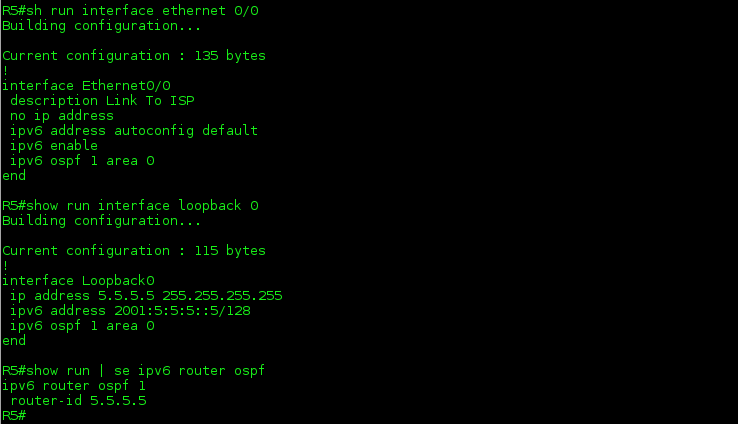 The Same configuration exist on Router 1 as we saw above, there is nothing special in this side of the Customer-A, only the IP addresses are different:

Let’s Start the Verification from the Ping initiated from Router 1 toward Router 5 Loopback interface and then see how traceroute works:

From above you can see that the ping to the IPv6 enabled interface works perfectly while we have also configured IPv4 under the same configuration and that obviously will be unreachable. ( timed-out )

Let’s Verify the same from Router 5:

You can see the same works well for IPv6 enabled address only, let’s do some trace and see how the path looks like:

As you can see that the Router – 1 is connected to R2 and then R3 , R4 and then R5, but from the above scenario we don’t even see the Router 3 in the middle, the path which is selected to reach R5 are R2>Tunnel>R4>R5, and the same goes vice versa:

So we have successfully configure the tunnel and encapsulate the IPv6 Packets inside the IPv4 Packets and reach the destination: