Cisco Live at Orlando announce Virtual Internet Routing Lab (VIRL). It is Cisco’s answer to GNS3 or other IOS Simulator using virtualization to create virtual network topologies. This tools will be as revolutionary as GNS3, but at a much larger scale. It is an awesome tool that can be used for certification studying but also to validate production designs.

An enterprise systems developer expects the required systems resources for software development to be readily available for development and test purposes. When those resources constitute web application servers and databases, this is trivial with virtualisation, and generally unremarkable in today’s enterprise environments.

Below is a screen shot of VIRL. It is using Oracles VMMaestro GUI based on Java. In the screen you can see network topology which is drop and drag. On the left side in purple there is a list of all saved networks. The right middle side has a list of supported devices. Top right side has all of the currently running devices and bottom right preconfiguration tabs. To access CLI of these routers, you has to run in simulation mode then Telnet to individual devices. The preconfiguration is a nice feature that allows you preconfigure IP addresses, Loopback interfaces or routing protocols like OSPF or BGP. 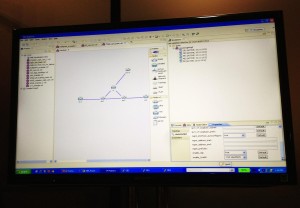 Using VIRL you simulate your design on a network virtualization platform that provides a hands-on training and education framework in addition to a testing and development environment thereby creating a high fidelity model of a network. So, now you can replace your racks with a single server or may be Cisco itself would launch an appliance for this.

VIRL is a network simulation system based on OpenStack and virtual instances of our core network operating systems (NOSs). With the VMMaestro GUI, one can create, with drag-and-drop, network topologies, and have the configuration auto-generated. Then, with a single click, one starts the simulation engine. The network topology is realised as a running network of VMs, each of which is an instance of a Cisco NOS representing a switch or routing platform, orchestrated by OpenStack.

Additionally, you will be able to run virtual servers within the topology. Running any virtual server opens up the testing environment to many capabilities that run in the production networks. There is a feature to SNAT the topology with existing physical networks. Both of these capabilities provide options to scale outside of the virtual environment. The virtualization is so good that Cisco is concerned that people will use these in production.

When will it be released to the general public and how can you get your hands on it? Cisco is planning on releasing the first public release in Jan 2014.

Below are some screen shots of the VIRL: 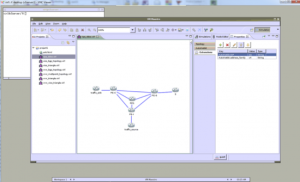 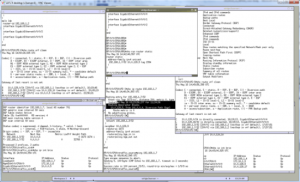 You Can have more Info From Cisco.